The disk is small — just 12 inches in diameter — but it has loomed large in the minds of people across millenniums. Made of bronze, the artifact was inlaid in gold with an ancient vision of the cosmos by its crafters. Over generations, it was updated with new astronomical insights, until it was buried beneath land that would become the Federal Republic of Germany thousands of years later.

This is the Nebra sky disk, and nothing else like it has been found in European archaeology. Many archaeologists have declared it the oldest known representation of the heavens, and to Germans it is a beloved emblem of heritage that connects them with ancient sky watchers.

“The sky disk is a window to look into the minds of these people,” said Ernst Pernicka, a senior professor at Tübingen University and a director of the Curt-Engelhorn Center for Archaeometry in Mannheim.

But while Dr. Gebhard and Dr. Pernicka both acknowledge the disk’s past and present cultural resonance, they do not agree about much more. The two men and others are polarized by a bitter archaeological feud over the object’s true age. Many side with Dr. Pernicka in saying that the object is roughly 3,600 years old and comes from the Bronze Age. But Dr. Gebhard and some colleagues hold firm to their arguments that it must be about 1,000 years younger, saying it shares more with totems of the Iron Age.

The dispute is an “unhappy situation,” said Harald Meller, a professor at the Martin Luther University of Halle-Wittenberg and director of the State Museum of Prehistory in Halle, the German institution that is the sky disk’s home. He stands by his conclusion that the disk dates to the Bronze Age. 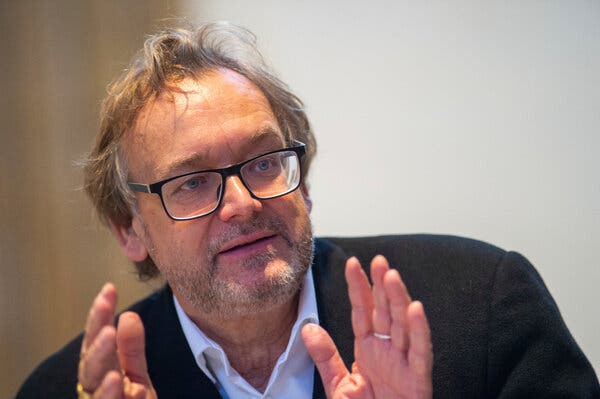 Harald Meller, an archaeologist who helped recover the sky disk and has promoted its Bronze Age provenance, in 2019.Credit…Klaus-Dietmar Gabbert/dpa/dpa-Zentralbild

A paper published late last year by Dr. Pernicka and Dr. Meller offered a strong rebuttal to the case for the Iron Age made by Dr. Gebhard and Rüdiger Krause, a professor of prehistory and early European history at Goethe University Frankfurt. While some believe this should settle the argument, other archaeologists think the debate will, and should, continue.

“This controversial discussion of questions that have not yet been finally clarified will trigger new investigations, especially in Halle, and motivate research to make progress,” said Wolfgang David, the executive director of the Archaeological Museum Frankfurt, who has not been involved in either side’s studies.

The Nebra sky disk is plundered treasure. This is where the problems all begin.

Two men claimed they found the disk, along with other ancient artifacts, during the summer of 1999 on a hillside called the Mittelberg near the town of Nebra, about an hour’s drive southwest of Halle. After denting and scratching the artifact as they dug it up, they sold it and the rest of the hoard to a trader in black market antiquities.

Dr. Meller also led the excavation of the Nebra site and worked with other archaeologists to establish its Bronze Age provenance. In earlier years, some scientists said the object was a forgery. But consensus eventually emerged that the disk was made by ancient people, and Dr. Meller has promoted the interpretation of the object as the oldest known human expression of clear astronomical phenomena, such as the Pleiades star cluster.

The excavation site at the Mittelberg, where the Nebra sky disk was found.Credit…Kenneth Garrett/Danita Delimont, via Alamy

“There’s plenty of evidence for archaeoastronomical orientations and an interest in cosmology and the night sky, the day sky, the planets and the stars during the Bronze Age,” said Alison Sheridan, an archaeologist who has worked with National Museums Scotland and was formerly president of the Prehistoric Society, an international group that promotes prehistoric research. However, the Nebra sky disk is “the oldest example of when somebody made a representation of that on material culture,” she said.

The sky disk may reach new heights later this year when Matthias Maurer, a German astronaut, heads to the International Space Station aboard a SpaceX capsule. Dr. Maurer incorporated the disk’s iconography into the design of the patch he will wear during the mission.

Dr. Gebhard and Dr. Krause challenged that Bronze Age timeline in a study published last year in the journal Archäologische Informationen, saying that the object originated in the Iron Age, about 1,000 years later.

“There is a very unclear situation about the history of finding the disk,” Dr. Krause said. “This is the big problem we have to solve somehow.”

The two archaeologists argue that the disk must have been found at another location and reburied with unaffiliated artifacts at the Mittelberg site to make it appear to be from the Bronze Age, and therefore more valuable. They point in part to an account that one of the looters gave in a book, and claim that since they published their study in September other traders in the antiquities black market contacted them to affirm rumors that the disk was from another spot.

“This site at the Mittelberg is obsolete,” Dr. Gebhard said. “We think it’s necessary to look around to a new site.”

They believe that because of the enormous cultural significance of the disk for Saxony-Anhalt, the German state where Halle and Nebra are, criticism of its popular origin story has been stifled.

Dr. Pernicka, Dr. Meller and other colleagues responded with a rebuttal published in November in the journal Archaeologia Austriaca that reasserts the Bronze Age roots of the artifact.

To counter rumors that the disk came from another site, they first point out that both looters testified in court that they had unearthed the hoard, complete with the disk, at the Mittelberg site. That testimony “was corroborated by a lot of scientific or forensic evidence,” said Flemming Kaul, a senior researcher at the National Museum of Denmark, who was not involved with either study.

Rupert Gebhard at the site of the Munich State Archaeological Collection, under construction, in August.Credit…Florian Peljak/dpa picture alliance/SZ Photo

Dr. Meller and his colleagues think the disk fulfilled sophisticated religious and calendric purposes for the people who made it. In their new study, they speculate that the Mittelberg site may have been selected as the resting place for the disk — along with two swords, two axes, a chisel and arm spirals in the hoard — because it served as an elevated perch for astronomical observations.

“It was not thrown away,” Dr. Pernicka said of the contents buried at the site. It was a deliberate arrangement, he said, which might have been a ceremonial burial without a body or an offering to the gods.

“We see this actually quite a lot in the Bronze Age, these so-called depositions, or ‘hoards of bronzes,’” said Maikel Kuijpers, an assistant professor in European prehistory at Leiden University in the Netherlands, who was not involved in either study.

The scientific basis for the claim of Bronze Age origin rests on a small piece of birch bark, ensconced in the handle of one of the swords, which was carbon-dated to about 1,600 B.C. Over all, the hoard appears typical of the Bronze Age, which some experts think strengthens the case that the disk also hails from that era.

“Unless it can be proved that the looters intentionally assembled a perfectly calibrated set of objects to set off an intellectual feud among specialists, the most parsimonious interpretation is that the pieces were found together,” said Bettina Arnold, an archaeologist and professor of anthropology at the University of Wisconsin-Milwaukee, who was not involved with either study.

The teams also disagree on evidence provided by soil samples, the provenance of the disk’s metals and the meaning of the bewitching celestial scenes that decorate its face.

Dr. Pernicka’s analysis of the Mittelberg site revealed concentrations of gold and copper in the soil, suggesting that metals from the disk had leached out over thousands of years. Dr. Gebhard and Dr. Krause are not convinced that those particles are linked to the disk, and they recommend further comparative soil analysis.

The debate over whether the disk’s iconography evokes the Bronze or Iron Age is more nebulous. Take the curious semicircle at the bottom of its face: Many archaeologists believe this feature, which was added some time after the disk was first created, represents a solar barge, a mythological vessel associated with an ancient Egyptian religion. The presence of this barge, known also as a barque, could hint at the northward spread of Mediterranean motifs across Europe in the Bronze Age.

“The Nebra sky disk should be considered as a religious object of utmost importance for our understanding of Bronze Age religion,” Dr. Kaul said. “When considering this figure as a solar barque in particular, it stands among the earliest renderings of the sun ship in the iconography of Europe.”

The solar barge interpretation is challenged by Dr. Gebhard and Dr. Krause, who think the curved shape of the figure does not match contemporaneous depictions of such sky boats found in dig sites from Egypt up through Scandinavia.

“We have no pictures, indeed, with barges which are totally round,” Dr. Gebhard said.

If their hypothesis about the solar barge is accurate, it raises doubts about the circular icon on the disk, commonly thought to be the sun. Dr. Gebhard and Dr. Krause counter that it is a full moon, situated to the left of the crescent phase. This interpretation of the disk, along with the presence of so many stars, corresponds to how European cultures of the Iron Age viewed the night sky, they say.

Ernst Pernicka with a replica of the Nebra sky disk in the State Museum of Prehistory in Halle, Saxony-Anhalt, Germany, in 2014.Credit…Hendrik Schmidt/dpa picture alliance

“In the Bronze Age, the disk is unique in form and decoration,” Dr. David said. “The representations are too naturalistic for the early and middle Bronze Age, in which lunar and solar motifs are represented in a very abstract way.”

However, some archaeologists have come to the opposite conclusion. Dr. Arnold said the disk was “much more consistent with Bronze Age iconographic and ideological concepts than those of the Iron Age in Central Europe,” and Dr. Kaul said he had “no problems with the iconography of the Nebra sky disk in European middle Bronze Age context.”

Dr. Kuijpers sees problems with both sides’ views on the iconography because the disk “doesn’t fit either period,” he said. In his view, the fixation on an artifact that is without parallel is the biggest problem with this dispute.

“It’s really unfortunate if we put all our focus on one exceptional status object,” Dr. Kuijpers said. “I think that’s not helping our discipline and what we can actually do. It’s great and fantastic to study and look at, but also, in a way, irrelevant to the bigger picture of normal early Bronze Age society.”

While parts of the iconography debate will remain subjective, Dr. Sheridan said she thought Dr. Pernicka and Dr. Meller’s article should settle the argument that the artifact was “a genuine early Bronze Age find.”

But the Nebra sky disk is an archaeological wild card, made as much from secrets as it is from gold, bronze and copper. The visual flare of its cosmic tableau continues to captivate public imagination, even as its elusive significance and the crimes that led to its excavation imbue the relic with tantalizing mystery.

“While on balance the evidence (such as it is) is tilted in favor of a Bronze Age date,” Dr. Arnold wrote in an email, “the Nebra Disk is a fascinating but tragic find whose true importance will likely remain obscure no matter how many tests it is subjected to.”