OTTAWA — When Robert was 18, he was arrested by Montreal’s police for possession of a small amount of hashish, an event that would upend his young life.

The charge brought him 30 days in jail, and the conviction ended his part-time job as a translator.

“Back then, you smoke a joint, you would get arrested,” said Robert, who asked that only his first name be used because of the continuing stigma of his criminal record. “Then the cops would put you in a car, then pull over and give you a couple of shots in the head. You get slapped around just because of smoking.”

His arrest in 1988 as a teenager marked the start of a long, unhappy history with Canada’s legal system, with his first jail stint opening up a new trade: burglary.

“It was like school,” said Robert, who spent a total of 14 years locked up, roughly divided between convictions on drug offenses and thefts to buy more drugs. “I went there for smoking and then guys are showing me how to open doors.”

The recreational use of cannabis was legalized in Canada two years ago, and when the government of Prime Minister Justin Trudeau made its legalization pitch to the country, it was stories like Robert’s — a life derailed by a possession charge — that most resonated with many Canadians.

Legalization, the government vowed, would address the inequalities in a criminal justice system where marijuana and hashish penalties and prosecutions — and the lifelong burdens they impose — had fallen disproportionately on marginalized communities, particularly Black Canadians and Indigenous people.

That promise has largely been kept, with legalization essentially ending what Akwasi Owusu-Bempah, a professor of sociology at the University of Toronto who studies race and policing in Canada, called the “heavily racialized” arrests for marijuana possession.

But some other key promises, and hopes, that came with Canada being the first industrialized nation to legalize marijuana remain unfulfilled.

The for-profit industry it created has struggled. Pot sales outside the legal system still thrive. Indigenous communities feel their needs are being ignored. And the injustices that came from criminalizing pot in the past have yet to be fully remedied.

As more of the United States legalizes marijuana, with voters in New Jersey, South Dakota, Montana and Arizona this past November backing recreational use, joining about a dozen other states, here’s a look at the Canadian experience two years into its national experiment. 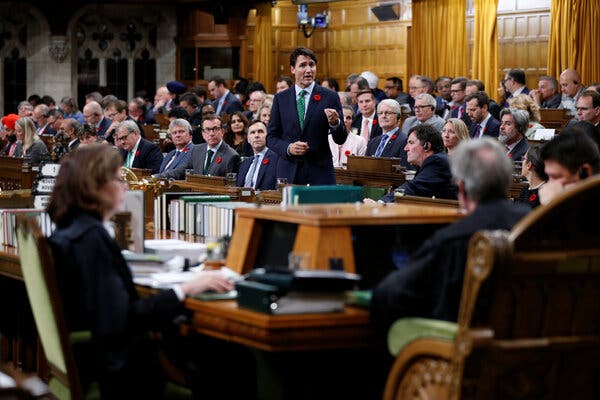 Prime Minister Justin Trudeau was able to persuade his party to legalize marijuana with an argument based on fairness and equality. Credit…Chris Wattie/Reuters

An Emphasis on Fairness and Equality

Mr. Trudeau’s pledge to legalize marijuana was not universally welcomed by Canadians, including some members of his Liberal party, who feared it would encourage use, particularly among teenagers.

But the prime minister persuaded his party, and many voters, with an argument based on fairness and equality.

Mr. Trudeau illustrated the system’s bias with a family story. In a 2017 interview with Vice, he said that his brother, Michel, was found carrying a couple marijuana joints by the police in 1998, six months before he was killed in an avalanche.

Their father, Pierre Trudeau, a former prime minister, came to the rescue.

“We were able to make those charges go away,” Mr. Trudeau said. “We were able to do that because we had resources, my dad had a couple connections, and we were confident that my little brother wasn’t going to be saddled with a criminal record for life.”

Legalization, he promised, would ensure that not just the connected and wealthy could avoid a criminal record.

The new law has all but eliminated possession charges. In 2018, the police recorded 26,402 possession cases until legalization went into effect in mid-October. In 2019, that number dropped to 46, according to Statistics Canada. (Possessing over 30 grams of marijuana remains illegal.)

A report released in August by the Ontario Human Rights Commission showed just how tied to race cannabis arrests had been before legalization: An analysis of police data found that while Black people made up 8.8 percent of the population of Toronto, they faced 34 percent of marijuana possession charges there between 2013 and 2017.

The police have lost one tool they once used, Professor Owusu-Bempah said,“as a way of bringing certain marginalized populations into the criminal justice system.”

But how much change that’s brought to the system as a whole is open to question. While Canada is only starting to collect crime and police data that includes race, several leaders from minority communities continue to demand action against what they call systemic racism within many police forces. Last June Mr. Trudeau acknowledged that systemic racism is found in the Royal Canadian Mounted Police, the national police force, and other law enforcement agencies.

‘I’ve Got So Much Against the System’

While decriminalizing marijuana possession is viewed as a step toward building a fairer justice system, many charged under the old law are still dealing with the devastating consequences, despite promises of redress.

“We haven’t reckoned as a country with the impact that drug prohibition has especially had on Black Canadians,” Professor Owusu-Bempah said. “Unfortunately, too many of them are being left with a criminal record.”

The legalization effort came with an amnesty program the government said would erase criminal records for possession, but there are barriers to access.

The process, Professor Owusu-Bempah said, is both complicated — with as many as six steps involved — and underpublicized, making it more a privilege for the few than a widely available solution.

While there is no government statistic for the number of Canadians with possession records, a 2014 report by the Center for Addiction and Mental Health, a Toronto hospital and research center, put the figure as high as 500,000.

As of mid-November, just 341 people had succeeded in erasing their records. There are no fees, but applicants must frequently spend money to travel to the place of their arrest to retrieve their records, and they must be fingerprinted.

Even if Robert, who has lived in Vancouver the past 25 years, could afford to return to Montreal, he says it wouldn’t be worth it. Removing the possession charges would not alter the theft convictions that followed.

“I’ve got so much against the system,” said Robert, who has stayed out of jail the past decade and works for an overdose-prevention group. “It made everything go out of my reach.”

When marijuana was illegal in Canada, the Green Mile was a popular place to buy it, with about a dozen mismatched shops along a stretch of highway in Ontario offering every kind of cannabis product imaginable.

Two years after legalization, customers still come to these stores in the Indigenous community of Alderville — although the sellers operate outside the new system put in place to regulate legal sales.

“These people know what I’m looking for,” said Jess Lihou, whose one-hour drive to Maryjane’s Cannabis Dispensary in the Green Mile was justified, in her view, for two main reasons: price and selection.

The provincial police in Ontario generally respect the sovereignty of Indigenous communities and take enforcement action against shops like those along the Green Mile only if requested by a community’s leaders.

But the new system has been criticized for keeping these Indigenous operations in a gray-market legal limbo, despite promises that Indigenous people would be consulted and made part of the new system.

“Legalization happened so quickly that these issues of equity and issues of sovereignty with respect to Indigenous people were not properly addressed,” Professor Owusu-Bempah said. “The government’s still trying to figure out exactly what it wants to do.”

In Ontario, the provincial government is meeting with Indigenous leaders about the shops, according to Jenessa Crognali, a spokeswoman for Ontario’s attorney general.

“The province remains committed to continued engagement with First Nations communities interested in having provincially regulated stores or in developing their own approaches to legal cannabis retail,” Ms. Crognali wrote in an email.

But with their legal status still unclear, the threat of being shut down hangs over Green Mile shops.

“We’re hopeful, but we’ve never been too confident,” said Laurie Marsden, a co-founder of one of the shops, Healing House, which emulates the provincial system by running a lab that tests for potency and contamination. “We believe in our sovereign rights and that we have the ability to produce, grow and sell the medicines to our customer base.”

Profits, and Diversity, Hard to Find in Legal Market

When Mr. Trudeau announced his government’s plans for legalization, the creation of a major new source of jobs — or tax revenue — was not in the program.

And these companies’ executives are overwhelmingly white, according to an analysis by Professor Owusu-Bempah.It concluded that 2 percent of the companies’ leadership are Indigenous people and 1 percent are Black Canadians.

“African-Canadians and other racialized Canadians that were adversely affected by cannabis prohibition need to be given a chance to benefit from the fruits of legalization,” Professor Owusu-Bempah said. “We had this situation where Black and Indigenous people were being overly criminalized. Now they’re being left out of what is a multibillion-dollar industry.”

The Cannabis Culture Lounge in Vancouver in September 2018, one month before legalization. Credit…Alana Paterson for The New York Times

‘Not Just Going to Roll Over and Go Away’

In addition to a fairer legal system, the government promised legalization would shift marijuana sales out of the black market, parts of which are dominated by organized crime.

“By controlling it, by legalizing it,” Mr. Trudeau said in 2018, “we’re going to ensure that criminal organizations and street gangs don’t make millions, billions of dollars of profits every year.”

And the strict regulations governing legal sales, the prime minister promised, would ensure that Canadians were consuming marijuana not adulterated with other drugs or toxins and would eliminate sales to minors.

The current pot scene in Vancouver is a good illustration of a promise that still has a ways to go before being fulfilled.

The city once had more pot shops than Starbucks, with more than 100 at the peak. Now, there are about 19 unlicensed shops, along with 34 legal operators, numbers that broadly reflect the situation across Canada: Sales outside the legal system are shrinking but have not disappeared.

“The shift has started, and maybe around half the market has transitioned from illegal to legal retail sources,” said David Hammond, a professor of public health at the University of Waterloo in Ontario who is heading a multiyear study on cannabis use.

With loyal customers and often a competitive advantage on price (with no taxes to pay) and selection, the illegal shops are hanging on.

“They’re not just going to roll over and go away,” said Mike Farnworth, the minister of public safety in British Columbia.

In its latest survey released just over a year ago, Statistics Canada, the census agency, found that 28 percent of Canadians shopped for marijuana exclusively at legal stores and websites, while 58 percent used a mix of legal and illegal sources.

Shutting down the unlicensed stores has not been a priority amid an opioid crisis: In British Columbia, from January through October 2020, 1,548 people died from overdoses.

But there are clear signs the legal domestic option is forcing gangs to look elsewhere. The number and size of seizures of outbound marijuana, said Mr. Walker, referring to pot headed to the United States, “are growing exponentially.”

THE TAKEAWAY: Legalization largely delivered on its promise for a more equitable Canada, but has not eliminated unlicensed sales or brought redress to many of those whose lives were handicapped by a conviction.