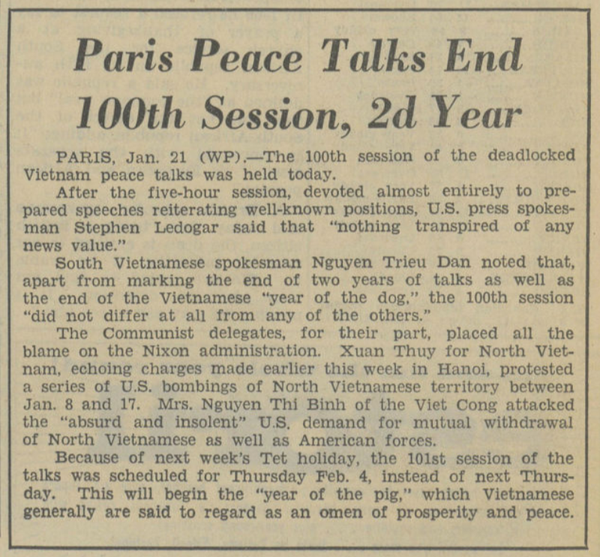 South Vietnamese spokesman Nguyen Trieu Dan noted that, apart from marking the end of two years of talks as well as the end of the Vietnamese “year of the dog,” the 100th session “did not differ at all from any of the others.”

The Communist delegates, for their part, placed all the blame on the Nixon administration. Xuan Thuy for North Vietnam, echoing charges made earlier this week in Hanoi, protested a series of U.S. bombings of North Vietnamese territory between Jan. 8 and 17. Mrs. Nguyen Thi Binh of the Viet Cong attacked the “absurd and insolent” U.S. demand for mutual withdrawal of North Vietnamese as well as American forces.

Because of next week’s Tet holiday, the 101st session of the talks was scheduled for Thursday Feb. 4, instead of next Thursday. This will begin the “year of the pig,” which Vietnamese generally are said to regard as an omen of prosperity and peace.