It’s been less than two weeks since Representatives Peter Meijer, Tom Rice and Liz Cheney broke with nearly all of their Republican colleagues in the House and voted to impeach President Donald J. Trump, but in their home states, the backlash is already growing.

In Michigan, a challenger to Mr. Meijer received a boost when Steve Bannon promoted him on his podcast.

In South Carolina, a local Republican is getting so many calls urging him to run against Mr. Rice that he can’t keep his phone charged.

And in Wyoming, a state senator called Ms. Cheney, the No. 3 Republican in the House, “out of touch” with her home state as he announced his primary campaign against her.

The 10 House Republicans who voted for impeachment are already facing a fleet of primary challengers, censures and other rebukes from their hometown Republican Party organizations, an indication that the battle over Mr. Trump will play a defining role in shaping the direction of the party during the next two years.

“Trump might be gone, but Trumpism is virtually guaranteed to be a part of the 2022 elections,” said Ken Spain, a former senior official at the National Republican Congressional Committee. “The tectonic plates have shifted within the G.O.P. and now members are trying to figure out how to straddle the fault lines.”

The impeachment votes are not only being framed as a loyalty test to Mr. Trump, they are also being used to tie the incumbents to Democrats like Speaker Nancy Pelosi, who for more than a decade has been the central bogeywoman in Republican congressional campaigns, with mixed results.

While some senior Republican officials in Washington, like Senator Mitch McConnell, now the minority leader, have begun trying to create some distance between the party and Mr. Trump, there is little indication that would-be Republican primary voters are interested in a political divorce.

Nearly all of the House Republicans who voted to impeach Mr. Trump have either already been formally censured by local branches of the G.O.P., face upcoming censure votes or have been publicly scolded by local party leaders. Efforts across the country to punish these lawmakers offer vivid illustrations of the divisions cleaving a party that has been shut out of power. 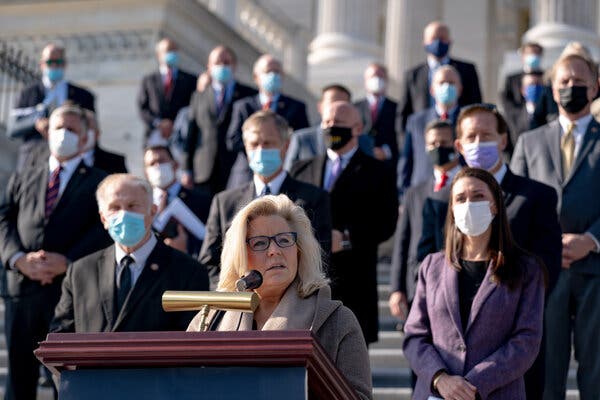 Representative Liz Cheney of Wyoming already has a primary challenger and has faced calls for her removal from House Republican leadership.Credit…Anna Moneymaker for The New York Times

There are already multiple Republicans in South Carolina angling to challenge Mr. Rice, a conservative from a Trump-friendly district whose vote to impeach shocked his colleagues and drew a rebuke from the chairman of the South Carolina Republican Party.

“I am 100 percent sure that Tom Rice is going to be primaried,” said Ken Richardson, the school board chairman in Horry County, who is leaning toward running against Mr. Rice himself. He said he has had to charge his phone three times a day to keep up with the nonstop calls and texts urging him to enter the race.

“I don’t know what he was thinking. I’m sure he’s got his reasons for why he voted the way he voted,” Mr. Richardson added. “If there’s ever been a Trump country, we live in Trump country.”

Another potential challenger to Mr. Rice, former Mayor Mark McBride of Myrtle Beach, S.C., said he believed Mr. Trump was the rightful winner of the 2020 election (he is not), and has collected several hundred signatures on a petition calling for Mr. Rice’s resignation.

“The president didn’t instigate it,” Mr. McBride said of the riot at the Capitol on Jan. 6. “The idea of the impeachment trial going to the Senate, Tom Rice created a foundation for it to continue on.”

Tom Norton, a Michigan businessman and Army veteran who lost a 2020 primary to Mr. Meijer, said the congressman called him to give him a heads-up the day he voted to impeach Mr. Trump. Mr. Norton immediately filed paperwork to mount another campaign against Mr. Meijer in 2022.

Mr. Norton said he believed Mr. Meijer made a mistake in blaming Mr. Trump for inciting the riot.

“We have a lot of people with a lot of passion and we can’t control everybody,” he said, before going on to exaggerate the pockets of unrest that took place alongside last year’s largely peaceful protests for racial justice. “Blaming President Trump is the same thing as blaming Kamala Harris and Joe Biden for all the riots that antifa did last summer.”

Representative John Katko of Central New York, who was the first G.O.P. lawmaker to back impeachment, is one of the few remaining Republicans who represents a Democratic-leaning district. Some Republicans in his district were outraged by his vote.

“‘Not very happy’ would be the politest way to say it,” said Fred Beardsley, the chairman of the Oswego County Republican Committee. “We’re very upset. I’m tremendously upset.”

“I think Mr. Katko crossed a line,” he continued. “He double-crossed us.”

For Mr. Katko and Representatives Adam Kinzinger of Illinois, Anthony Gonzalez of Ohio, David Valadao of California, and Fred Upton and Mr. Meijer of Michigan, all Republicans who voted for impeachment and hail from states likely to lose seats in this year’s redistricting process, the shapes of the districts they may seek to represent in 2022 have yet to be determined.

Democratic state legislators in New York and Illinois could draw Mr. Katko and Mr. Kinzinger into districts represented by fellow incumbent Republicans, potentially cutting off a path for a Trumpian insurgent, while commissions will determine district lines in California, Michigan and Ohio.

Gene Koprowski, a conservative filmmaker who filed to run against Mr. Kinzinger, said he did so to start raising money but he is waiting for the Illinois legislature to redraw its congressional district maps before formally beginning a campaign.

Challengers to Ms. Cheney, who represents the single at-large Wyoming district, don’t face the same calculation. Anthony Bouchard, a state senator, announced his campaign on Wednesday as President Biden was being inaugurated. By Thursday night, he was a guest on Newsmax TV and Laura Ingraham’s program on Fox News.

“Liz Cheney’s longtime opposition to President Trump and her most recent vote for impeachment shows just how out-of-touch she is with Wyoming,” Mr. Bouchard said in his announcement. “Wyoming taxpayers need a voice in Congress who will stand up to Nancy Pelosi and the Democrats, and not give them cover.”

Representative John Katko of Central New York, who was the first G.O.P. lawmaker to back impeachment, is one of the few remaining Republicans who represents a Democratic-leaning district.Credit…Anna Moneymaker for The New York Times

Many of the 10 Republicans who voted for impeachment have survived challenging races before. In California, Mr. Valadao won his 2016 race by 13 percentage points while Hillary Clinton carried his district by 16 points. He lost to a Democrat by less than 1,000 votes in 2018 before winning the seat back in November, even though Mr. Biden won the district by 10 points.

Indeed, a number of those Republicans have strong personal brands at home, which may complicate the efforts of potential primary challengers. Mr. Gonzalez, for example, was a star on the Ohio State University football team. And at least some party leaders, shaken by the violence at the Capitol, say the lawmakers who voted to impeach should be granted leeway.

“If he was here with us now I’d probably shake his hand and congratulate him for his conviction,” Jim Dicke, the Republican national committeeman for Ohio, said of Mr. Gonzalez. “There’s a lot to criticize in the process, but if you’re an elected official and you’re asked to vote, you can either say ‘yes’ or ‘no’ or abstain. You’re not allowed to say, ‘Wait, I don’t like the process.’”

In New York, Mr. Katko has twice survived being the target of Democrats trying to oust him from a Democratic-leaning district.

“We can’t be doing our own form of ‘cancel culture,’ whether it’s Liz Cheney or Katko,” said former Representative Peter T. King, a moderate Republican who represented a Long Island district for 28 years before retiring last year.

Mr. King floated the idea that Mr. Katko run for governor. “It would be so foolish to go after John Katko,” he said. “He’s one of the best we have. And if we can’t accept difference of opinion, then we’re no different than the other guys.”

In fact, Republicans have long battled one another over perceived purity tests, and in recent years the most powerful litmus test in the eyes of primary voters has centered on fealty to Mr. Trump.

“President Trump enjoys a high approval rating within the Republican Party, and his supporters are loyal,” said Joel Mattila, the Republican chairman in Clark County, Wash. His committee has already issued a warning to Representative Jaime Herrera Beutler, a Republican who voted to impeach.

“She’s going to face a primary challenge, based on what I’m hearing,” he said. “It seems like, as people are stewing on it and as time is passing, the intensity level is definitely increasing.”

Mr. Spain, the former House Republican campaign official, said it would fall to the corporate donors that typically support Republicans to provide financial support to the 10 who voted to impeach Mr. Trump. Michael McAdams, the N.R.C.C.’s communications director, said that the committee does not engage in primaries. That applies to incumbents in contested races, too.

“I would hope,” Mr. Spain said, “that members of the business community who are standing on principle and refusing to support Republicans who voted against certifying the election results would focus their energy and resources toward helping those members who did stand up on behalf of the American democratic process.”