This article is part of our continuing Fast Forward series, which examines technological, economic, social and cultural shifts that happen as businesses evolve.

This was the year that Tesla’s lock on high-end all-electric vehicles began to break, with Audi and Jaguar sending electric S.U.V.s out into the world. They joined more workaday E.V.s from Chevrolet, Honda, Hyundai, Kia and Nissan.

So 2019 was, finally, the year of the electric vehicle. Right?

Sales of electric autos were double those from the year before, but they were still dwarfed by their fossil-fuel-powered brethren. With a slew of new models promised for next year and beyond, and with charging station infrastructure still being built out, the tipping point for electric autos is still in the future.

But automakers are betting big on that future, and how quickly the industry takes off depends not just on choice but on a shift in customer expectations. Hurdles to a breakout include higher prices, the end of federal tax subsidies for some models and a paucity of charging stations — even though the industry argues that most charging will be done at home at night. That, especially, can be a deterrent given electric cars’ shorter range.

Even so, as Mark Reuss, the General Motors president, recently wrote, “just as demand for gas mileage doesn’t go down when there are more gas stations, demand for better range won’t ease even as charging infrastructure improves.” 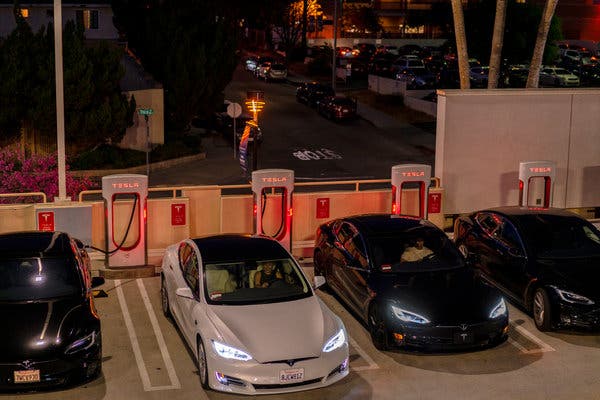 Charging up Teslas in Burbank, Calif. Charging infrastructure is growing but still a sliver compared with gas stations.Credit…Philip Cheung for The New York Times

That infrastructure is growing, nonetheless. More than 21,000 locations in the United States, with some 57,000 hookups, offer Level 2 charging, which can add maybe 20 miles of range per hour. These are fine for parking at the office or overnight, but useless on a road trip.

For charging to roughly 80 percent of a battery’s capacity in about a half-hour, there are 3,300 DC Fast Charging locations with 12,000 charge points. Many of these are proprietary Tesla chargers, however.

A traditional car, of course, can fill up at 168,000 gas stations across the country in the time it takes to buy a Slim Jim and a Coke.

The evolution toward electrics has given carmakers freedom to play with design — picture Tesla’s jagged-edge pickup — while others are sticking with tried-and-true sedans and crossovers, simply swapping out the drivetrain.

Here’s a look at some of the electric vehicles that are just reaching the market, will soon be available or are expected to arrive in 2021.

The Audi e-Tron Sportback will fit right in with traditional Audis.Credit…Sascha Steinbach/EPA, via Shutterstock

Audi e-Tron Sportback: A four-door coupe version of the full-size Audi e-Tron sport utility vehicle, introduced last spring, the Sportback is expected to be available this spring. Designed to look and handle like traditional Audis, the e-Tron models will feel familiar to anyone who knows the brand.

The all-wheel-drive e-Tron S.U.V. charges to 80 percent of its 204-mile range in 30 minutes with a commercial fast-DC charger. Improvements in aerodynamics and battery efficiency should modestly increase the Sportback’s range.

BMW iX3: BMW will start production of its electric S.U.V. next year at its plant in China. The rear-wheel-drive vehicle is expected to provide 286 horsepower and a 273-mile range, according to the European test cycle, which is more optimistic than its American equivalent.

Ford Mustang Mach-E: Ford enlisted its Shelby designers to create a traditional-looking electric S.U.V. that would echo its iconic Mustang sedan. Its first version, a 332-horsepower all-wheel-drive model, will be available late 2020, with a 459-horsepower GT version expected 18 months from now.

The biggest changes, beyond fuel, are inside. A new version of the much-criticized Ford Sync connect service will feature over-the-air updates. Artificial intelligence will monitor a user’s habits and suggest appropriate actions. For example, it may ask if you want to call your mother at a certain time if it notices you typically do that each day.

Natural language comprehension will allow users to state commands in various ways, such as “Take me to Santa Monica” or “I want to go to Santa Monica.”

Mileage will range from an expected 210 to 300 miles, depending on the model.In the “frunk,” or front trunk, the space usually occupied by an engine will offer space designed to hold ice for tailgating; a drain plug will be included.

The Mercedes EQC 400 4Matic will calculate the most power-efficient route.Credit…Mark Blinch/Reuters

Mercedes EQC 400 4Matic: Originally expected to arrive in the States next year, the first purpose-built all-electric Mercedes will be delayed until 2021, the company recently announced. It blamed demand in Europe.

The all-wheel-drive vehicle, starting around $70,000, will feature its screen-based MBUX infotainment system now used in a number of new Mercedes models. To optimize the vehicle’s range, the MBUX system can calculate the most power-efficient routes and direct drivers to high-speed charging stations. Time to charge to 80 percent will be about 40 minutes with the fastest chargers.

The two current models — available with 522 or 562 horsepower — will accelerate from zero to 60 miles an hour in 3.8 seconds. The Taycan has a range of just over 200 miles, and it is one of the fastest-charging E.V.s around: A DC fast charger will juice it to 80 percent capacity in 22 minutes. The company expects that by 2025, half of its sales will be either fully electric or hybrid models.

Volvo XC40 Recharge: To cut costs and time to market, Volvo is equipping its existing XC40 S.U.V. with an electric drivetrain. Expected at the end of 2020, for “under $48,000” after incentives, this is the start of a Volvo product road map that will bring out one new E.V. model each year.

Over-the-air updates will be available for all vehicle features. The “completely rethought” infotainment system is based on the Android operating system, with Google Maps, Google Assistant and the Google Play app store embedded within the vehicle so they work without a phone. The 402-horsepower engine is expected to provide about 200 miles of range. A high-speed commercial charger will fill the XC40 to 80 percent capacity in 40 minutes.

Byton: Distinguished by many enormous wraparound screens, this Chinese-built S.U.V. will be sold in the United States, at a starting price of $45,000, beginning in the second half of 2021. Sales in its home country will start at the end of next year.

Drivers can alter the screen display to account for whether the vehicle is moving or not, and whether the driver or passenger is watching. Artificial intelligence is combined with subscriptions to popular music and video services, and linked via facial recognition, so it will know your favorite artists. If the driver allows, the vehicle will have access to calendar events; knowing that you’re finishing up your spin class, the system could cool the car before you arrive.

Available as a 225- or 300-mile range version, the Byton will be sold directly and through dealers, with its first company store to open in Los Angeles by the middle of next year.

Canoo’s design isn’t the only radical thing about it: The vehicle will be available via subscription only.Credit…Damian Dovarganes/Associated Press

Canoo: One of several hopeful start-ups, Canoo plans to sell its namesake model at the end of 2021. Unlike several established marques, Canoo has taken advantage of the lack of an internal combustion engine to rethink the look of a vehicle.

The symmetrical Canoo is positioned as “an urban loft on wheels,” the company says, with the rear seats arranged more like a sofa. To increase interior space, Canoo eliminates the traditional engine compartment and its protective firewall. The use of “steer by wire,” an electronic rather than a mechanical system, eliminates the need for various mechanical components, also allowing for more freedom in the placement of the steering wheel.

Infotainment will be provided through a smartphone connection.

The Canoo, with an anticipated 250-mile range, will be available only through subscription, the price of which (undisclosed as of yet) will cover the vehicle, registration, license and insurance. The subscription can be canceled or rolled over into another model when available, at any time.

Faraday Future: Once left for dead after a splashy premiere three years ago, a planned Las Vegas factory that never got built, and a Chinese founder and funder who went bankrupt, the company is back with a new leader, the former head of Byton; new funding; and a rethought vehicle.

Where once Faraday Future advocated the “bring your own device” approach to infotainment now promoted by Canoo, the current version of the large S.U.V. will sport 11 screens in its ultra-high-end FF91.

The company claims that the FF91 will accelerate from zero to 60 in an astonishing 2.2 seconds (although it’s not clear why anyone would need to), and cost $150,000 to $200,000 when it comes out by September. If there’s demand, the company can build up to 15,000 units annually in a Hanford, Calif., plant that’s smaller than the ambitious one it abandoned in Las Vegas.

The company says it will make money at that volume by selling its hardware and software to competitors. Plans for a smaller, more affordable FF81 exist, and the company hopes to enter “preproduction” by the end of 2020.

Volkswagen ID4 Crozz: VW’s first purpose-built E.V., this compact S.U.V. is due in the States by the end of 2020, priced in the mid-$30,000s after tax credits. This will be followed in 2021 by a larger, Passat-size S.U.V., the Space Vizzion, and then in 2023 by the Buzz, Volkswagen’s electric version of its iconic bus. The vehicles will at first be imported and eventually built at the automaker’s factory in Chattanooga, Tenn.

About the same size as VW’s Tiguan, the ID4 will have a range of 200 to 300 miles. Navigation commands will be shown in a windshield heads-up display, with arrows overlaid on the screen to show when to turn.